The 254 DL3 comes standard with Regency’s performance pontoon package, which actually makes it a “tri-toon” more than a pontoon. That’s because the package adds a center log in addition to the two outside pontoons. The logs are also equipped with lifting strakes and wave deflectors that make this boat able to handle and carve turns as well as many fiberglass boats. The third tube also is the main reason this 25-footer can handle 300 horses on the back, which not only means speed, it means getting up on a plane faster. I found the boat felt solid underway, with a minimum of vibration and hardly any noticeable wave and chop noise.

Our test boat was equipped with a 200-horsepower Mercury Verado four-stroke outboard, and let me tell you, not only was the engine smooth and quiet it was powerful, propelling our 254 DL3 to a top speed of 42 mph. At that speed, the gauges showed a fuel burn of about 28 gallons per hour. Combine that spunky engine with the 254 DL3's performance pontoon package and you’ll be impressed with how fast this boat gets up on a plane. A slow cruise speed was around 17 mph and 4.5 gallons per hour. Bump it up to around 30 mph, and the Verado will drink about 14 gallons of fuel per hour, which isn’t a bad compromise of economy and speed.

The interior of the 254 DL3 is all about lounging and relaxing. Our test boat was fitted with two forward-facing lounges up front that can also be used as bench seating, thanks for some pretty awesome back bolstering. While the mechanism for lifting the seat bottoms up to access the stowage underneath isn’t as slick and nice as what Harris FloteBote boat uses on its boats (a feature I wish every pontoon maker would mimic), there’s plenty of room for tons of gear in the rotomolded stowage bins under each cushion. And that’s a good thing, considering this boat has a capacity to entertain 15 people. I also liked the moveable cup holders, which can be shuffled around and secured to the seating with Velco straps.

I found the captain’s chair at the helm extremely comfortable and liked that it swiveled around so easily; some chairs are much more difficult to move. The dash is well thought out and has clever cubbies with covers where you can stow keys, phone, or a wallet out of the weather. Gauges were well placed and easy to read, but if you’re a gear-head like me, you might find yourself wishing for a checkbox on the options list for some of Mercury Marine’s more capable engine displays. The push-button accessory switches are not only lighted with cool, glowing LEDs, but they’re also machined from stainless-steel and have an amazingly robust feeling to them. I like that. Lowrance’s Elite-5 color depth finder/chartplotter with GPS is standard.

Midway down the 254’s length is the helm, which has an L-shaped lounge situated directly across from it, to port. I like this arrangement a lot, because it means you can involve the captain in a conversation with three or four people, instead of leaving him or her alone to their boat-driving duties. Behind the helm is a standard feature that is actually an option on many pontoon boats: a wet bar. While it’s certainly not huge and you won’t be preparing gourmet meals here, there’s a sink, cutting table, and stowage underneath. It’s a great place for rustling up some sandwiches and snacks, and it’s nice that Regency included it.

Back aft is a spacious sun pad with backrest that can accommodate up to three people, but two seems a more comfortable number for the space. Underneath it is a pop-up changing room. Going aft is a spacious swim platform with a swim ladder. 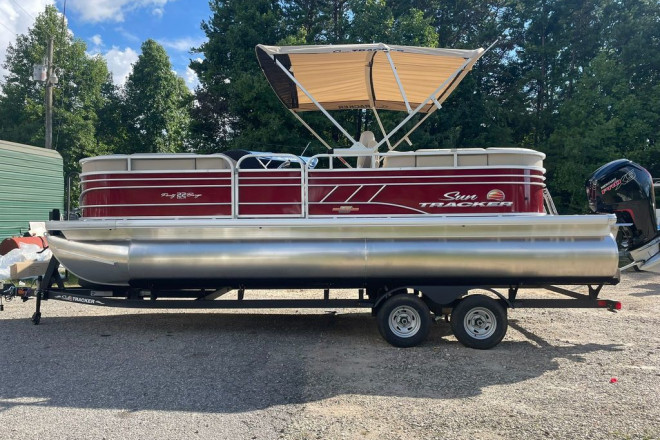 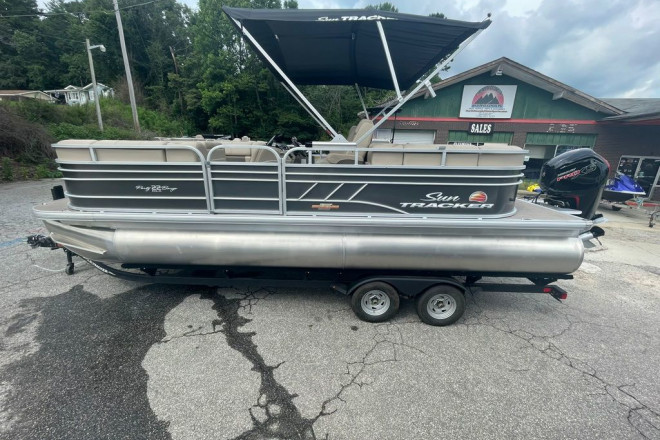